Infratec has been established to support the sustainable development of renewable generation and distribution systems in New Zealand, the Pacific and ASEAN region with the purpose  to reduce diesel usage and in particular to develop local capability.  We can offer end to end consulting, design, development, construction and operation capability in small and large scale grid connected and off-grid renewable energy systems and low to high voltage distribution networks.

Our portfolio of work includes:

Infratec is currently delivering a NZD$13m ADB contract to design, procure, construct and commission electricity mini-grid systems on four islands within the Cook Islands. These islands are Atiu, Mangaia, Mauke and Mitiaro. The systems are to meet 95% of the electricity generation needs for the communities on those islands. The system design range from 150kWp solar PV and 1.1MWh of battery storage to 460kWp PV and 3.4MWh of storage.

Infratec is currently delivering an EU Development Fund project which includes, but is not limited to, 25km of HV powerlines and associated equipment, a power station, a 150kWp solar plant on the island of Kiritimati, Kiribati.

Infratec is currently delivering a project on behalf of the NZ Ministry of Foreign Affairs to build the capacity of local government, private sector and the community on Seram Island, Indonesia to identify and commercialize renewable energy projects, in particular small hydro. This is a five year project.

Infratec has a team of HV line mechanics situated in Dunedin, New Zealand undertaking contractual works for Aurora Energy. This work includes participation in Aurora’s Fast Track pole programme.  The programme involves the replacement and remediation of poles and overhead equipment, including but not limited to fuses, cross-arms, insulators and pole-mounted transformers.

Infratec designed, procured and installed a 36kW, 142kWh lithium ion battery energy system at Alpine Energy’s depot in Timaru, South Canterbury. At the time, it was New Zealand’s largest grid connected battery. The purpose of the project was to trial demand response, load shifting and alternative tariff structures from the perspective of a distribution lines company.

Infratec was awarded the NZD$3.9m ADB contract to upgrade 17km of MV and LV networks on the islands of Mitiaro and Mauke in the Cook Islands.  The upgrades are associated with the delivery of solar/ battery hybrid systems on these islands.

In March 2014, Infratec was awarded a $3.3m contract to build a 961kW solar photovoltaic array at the Rarotonga Airport by NZ Ministry of Foreign Affairs and Trade. The project has been named “Te Mana o te Ra” or “the power from the sun” by Prime Minister Puna.

The project was commissioned in October 2014. Supporting Infratec in delivering the project were New Zealand companies SolarCity, AECOM, and NETcon. Civil construction and DC electrical works were provided by Cook Island based Mike Rennie Builders Ltd and Andersons Ltd respectively.

The solar farm will be owned and operated by Cook Islands electricity company Te Aponga Uira. The solar farm is connected to the local 11kV grid and will produce about 5% of Rarotonga's annual electricity demand.

In July 2013, Infratec won an A$1.8m contract with the Government of Nauru to supply equipment and expertise to rehabilitate the Nauru electricity distribution system. The project was awarded to Infratec following a competitive international tender process, with funding provided by the European Union under the 10th European Development Fund programme.

The contract required the supply and installation of 11kV and 415V overhead lines equipment, switchgear, transformers, customised maintenance vehicles and personal protective equipment over a 2 year timeframe in order to rebuild the network. A rotating team of senior line mechanics and cable jointers from NETcon in Timaru supervised the installation of the equipment and provided training to staff from Nauru Utilities Corporation over a ten month period, starting in November 2013.

In late September 2014 Infratec and Solar City were awarded a $770,000 contract to build a 170kW solar array on two rooftops in Funafuti, Tuvalu for NZ Ministry of Foreign Affairs. The project also involved painting the rooftop of the three-storey Government Building prior to installing the solar array on the roof. The project was successfully commissioned in June 2015.

The project provides 5% of the island’s total electricity needs and reduces diesel imports by 62,000 litres annually.

Infratec was commissioned by the NZ Ministry of Foreign Affairs and Tonga Power to assess the feasibility of wind energy in Tongatapu. Infratec, in conjunction with Aurecon, visited Tonga in early 2014 to meet with key stakeholders and inspect proposed wind farm sites.

The first phase of the project, completed in May 2014, involved a review of wind data captured from two masts on the island, previous pre-feasibility studies, assessing the two potential sites and developing a road map for a full feasibility study (Phase 2).

In 2012 NETcon International (now Infratec) delivered a $NZ18.6m government contract in Afghanistan.  The Bamyan Renewable Energy Project entails the construction of a sustainable electricity network for people living in the Bamyan province of Afghanistan.

The project is funded by the New Zealand Government’s international aid and development programme with the purpose of leaving behind the “gift” of an off-grid, sustainable power supply to serve 2,490 homes in Bamyan that are currently without electricity.  The project was completed in November 2013 and is among the largest off-grid power systems in the world.

The building of the power network involved the construction of a transmission and distribution system of poles and conductors to the villages of Bamyan, Haiderabad Mullagulam, Dragon Valley, and Nawabad Township. This involved the fitting and erection of 345 poles to carry the 21kV system, plus a further 264 poles to carry a 400V system for the 2,490 house connections. 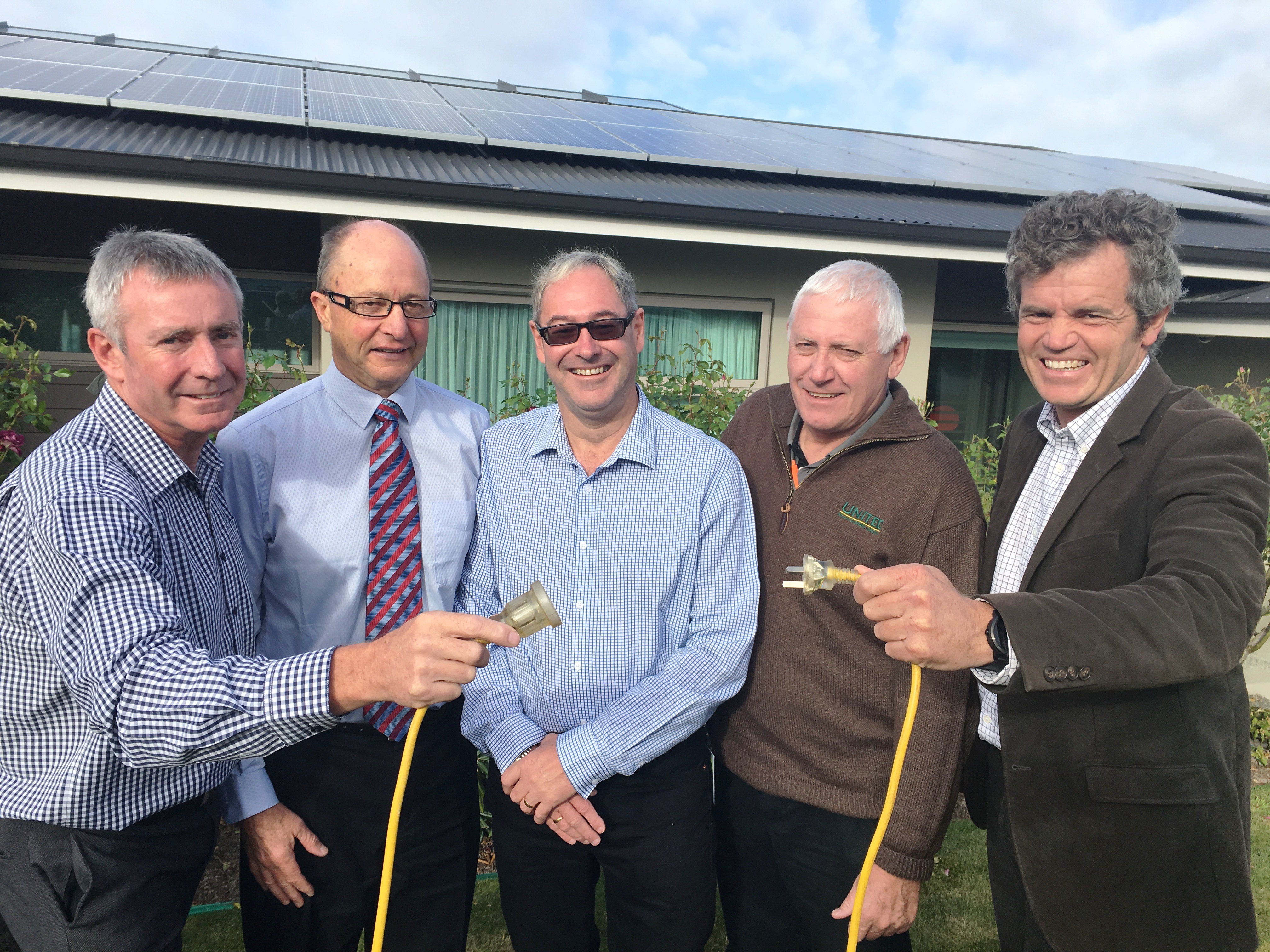 A reduction of $4200 a year in electricity costs is anticipated by Hospice South Canterbury with the installation of solar panels on its Broadway Avenue facility.

The 16.25 kilowatt system comprising 50 photovoltaic panels has been installed over the last week and Hospice general manager Peter O’Neill is delighted with the advantages it will bring.

“This should reduce our power bill by 20 per cent a year which is significant over the lifetime of the system. The installation also gives some protection against future increases in electricity prices with the bonus of using renewable energy from the sun.

“Hospice South Canterbury is once again indebted to the community with the cost of the project being met by the generosity of four organisations.

“The St Vianneys Timaru Trust has met the cost of materials with a $27,300 grant, Alpine Energy has paid for the installation costs of $6700, Infratec has provided the design work free of charge and the scaffolding work was donated by United Scaffolding.’’

St Vianneys Timaru Trust chairman Dale Walden said that trustees viewed the work of South Canterbury Hospice in the community as being very similar to that work of the Sisters Of Compassion when the Home Of Compassion operated in Timaru.

“That ‘special’ level of care does come at a cost and the community does have a part to play in supporting with those costs. Every dollar saved in operating expenses means that another dollar can be dedicated to the care of the patients and families.

“We have all had experiences of friends and/or family being cared for in Hospice South Canterbury and the Trust that we represent sees our support as being support for the wider community as well.“

The successful tenderer for the project was Infratec, a subsidiary of Alpine Energy. Time associated with design and procurement were an in-kind contribution from Infratec.

General manager of operations George Ritchie said Infratec was pleased to have participated in a fantastic community project in what is the largest solar PV system on the Alpine Energy network.

Alpine Energy group manager, corporate services, Michael Boorer said the project was an exciting opportunity for Alpine to be involved in.

“As well as supporting a worthwhile charity as part of our commitment to the South Canterbury community, the project was also able to demonstrate the ability and innovation of our subsidiary Infratec to deliver alternative solutions for the provision of electricity to our consumers.

O’Neill said while there would be times when the solar system would produce enough electricity to sell back into the national grid that was not the primary aim.

“The main aim is to reduce our power bill. We also looked at the feasibility of incorporating batteries for storing electricity but concluded it was not viable at this time. However, as technology evolves this could be an option and the system could be changed to incorporate storage.’’

The solar panel grant continues St Vianneys support of Hospice, with $500,000 contributed when the seven-bed unit was built in 2009. The trust has also recently contributed $17,000 to buy specialty electric reclining chairs for patients.

In October 2019, Infratec Sunergise JV commissioned a 1.15 MW Solar plant in Nauru. The project, entitled: The Nauru Energy Initiative: Construction of a Renewable Energy Infrastructure in the Republic of Nauru, was one part of the JV’s North West Pacific project which was jointly funded by the New Zealand Ministry of Foreign Affairs and Trade and the European Development Fund. The project also included renewable energy projects in the Republic of the Marshall Island, Federated States of Micronesia, the Republic of Palau.

The 1.15 MW solar array constructed in Nauru consists of 3200 360W modules and 40 25kW field mounted string inverters. The JV also installed and commissioned a ring main unit and transformer to connect the PV array to the existing 11kV network on Nauru.

Due to the fact that fresh water is scarce on Nauru, the PV array was constructed with a pilot water catchment system on 100m2 of the array. The water catchment system includes 25,000L of storage and will be used to provide water for module cleaning but also serves as an emergency source of water for the island. Testing on the water collected has shown it to be potable and based on the success of the pilot system the JV has been asked to develop a plan for expanding the water collection system. 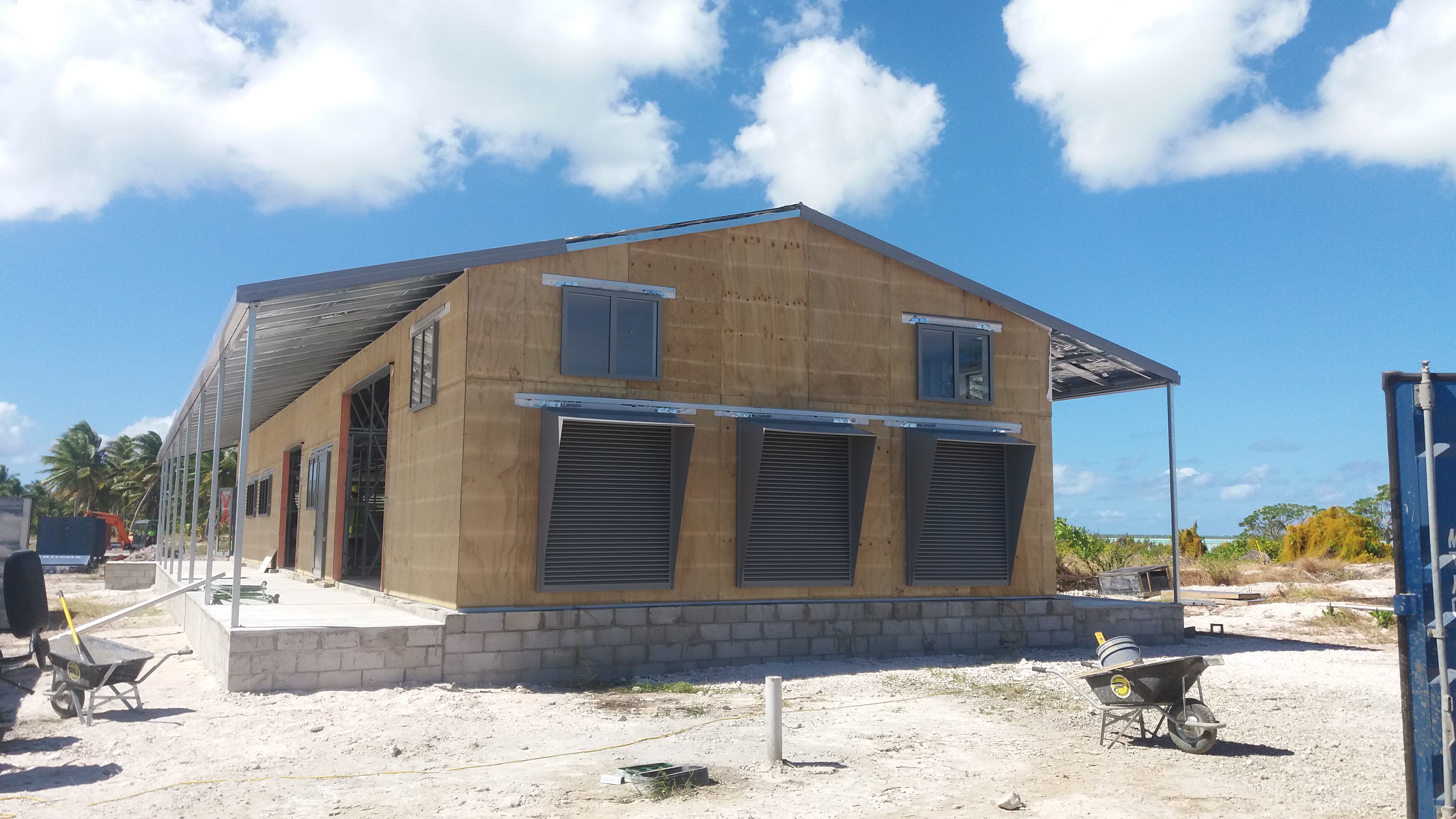 Infratec is delivering European Development Fund contract to design, supply and install a HV network, two power stations and a 150kW solar PV system on Kiritimati Island in the Republic of Kiribati.

The project will centralise the power system for Kirimati, providing a more reliable, efficient and safe electricity supply for the island. The 150kW solar system will reduce the islands demand on expensive diesel.

Kiritimati Island, in Kiribati’s Line Islands group, is the world’s largest coral atoll and the largest of the 33 islands in the Republic of Kiribati. The island is approximately 3,300 km east of Kiribati’s capital, Tarawa.

The project is expected to be completed in March 2018. 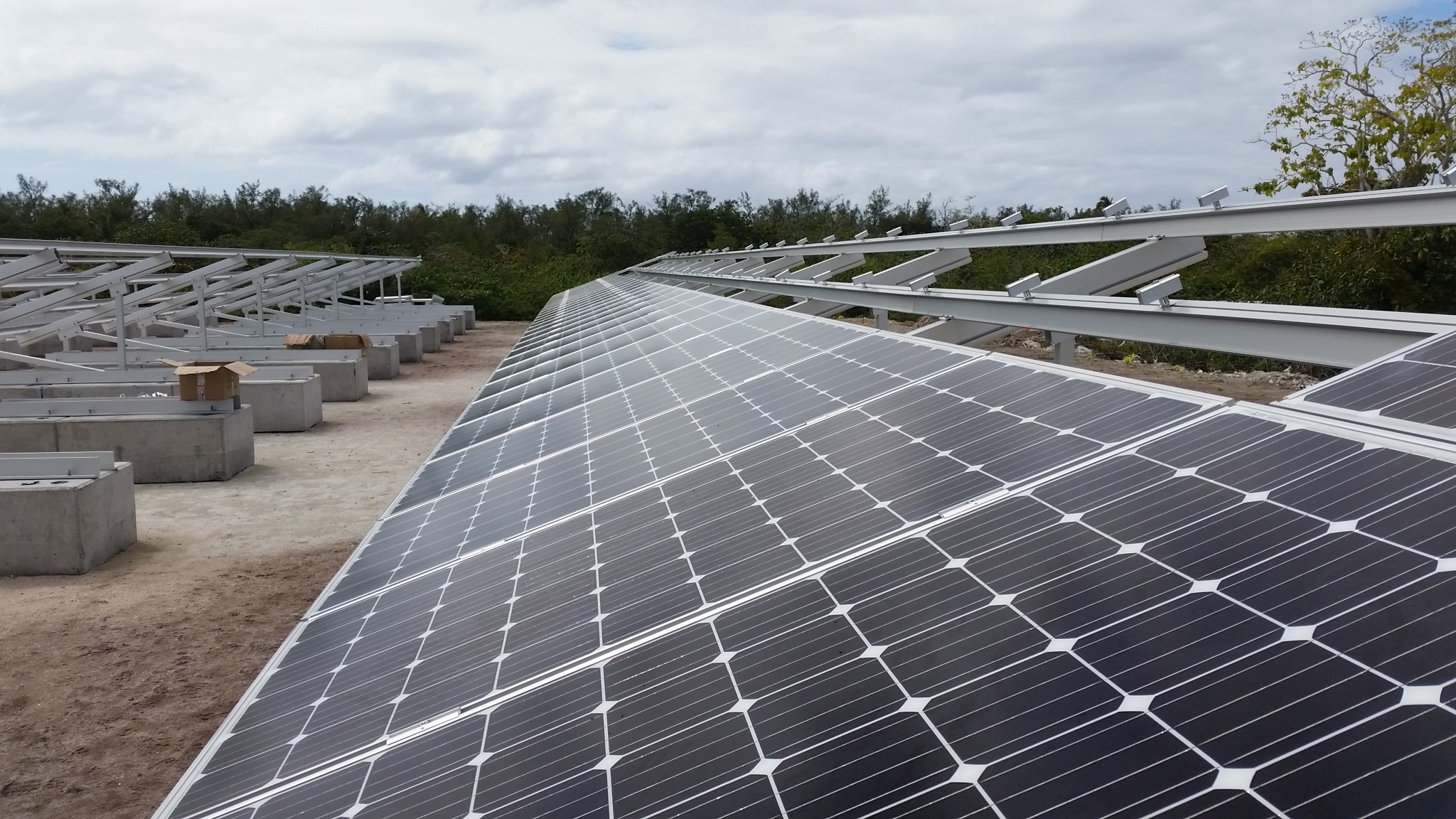 The mini-grids will supply each island with approximately 95% of their electricity needs, with an installed capacity of 1.3MWh of solar and 7.3MWh of battery storage.

The systems will reduce diesel consumption by about 360,000 litres annually, will remove about 960 tonnes of CO2 emissions a year and will supply the islands’ residents with a more reliable power supply.

Infratec is engaging Cook Islanders to support delivery throughout the project and building the capacity of local communities to support ongoing maintenance and operations of the systems.

The project will be completed by December 2017.