A community energy project based on the south-west coast of Western Australia is offering households an opportunity to become 90 per cent renewable “for the price of a coffee a day” as part of a privately funded, potentially 6.5MW virtual power plant.

This story was originally published on One Step Off The Grid

The Dunsborough Community Energy Project – which claims to be the first of its kind in WA, and Australia’s first VPP to be completely privately funded – is a collaboration between Perth-based company Redback Energy, investment outfit SUSI Partners and Perth law firm Jackson Macdonald. 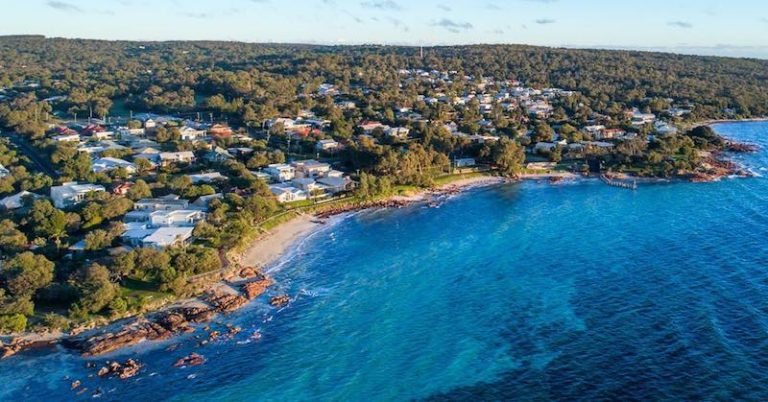 The group’s first major goal is to pool the resources of 1000 or more Redback solar and battery storage systems installed across Dunsborough and the neighbouring town of Yallingup, and connect them using Australian made aggregation and control software.

The hook for local households and small businesses is zero upfront cost for the technology, which would include 6.6kW of solar PV (Suntech panels), one Redback 5.0 kVA inverter, 7.2-9.6kWh of Pylontech (LiFePo4) batteries, installation included.

This cost will be covered by the around $12.5 million worth of equity funding being stumped up by SUSI, and then gradually paid off by VPP participants leasing the systems for a flat fee of $35 a week – “the price of a coffee a day” – over 10 years.

Once SUSI is repaid, the assets become fully owned by DCEP, and the lease payments can be “significantly reduced,” DCEP says.

Each participant will also have access to advanced software interface with all metering included and lifetime service and replacement as part of the lease agreement.

Redback, meanwhile, will source all the technology, install all systems, offer ongoing tech support, and run an operations centre to manage the Virtual Power Plant.

The project comes at a time when the WA rooftop solar market is booming, in lockstep with most of the rest of Australia, as households and small businesses choose to take control – at least partially – of their energy supply and costs.

Organisers of the Dunsborough project say there has been a clear message from consumers at recent information sessions, in response to being asked “why” they had come to hear more about the project.

Reasons included concern for the environment, and a desire to reduce the impact of climate change, but also a grass-roots desire to change the future of energy use for coming generations and to take action where industry and governments weren’t.

According to project lead, Emma Morgan, some of the most commonly offered responses included:

· We can’t wait for the government to create change;
· Be a part of a community cause, be a rebel;
· Being renewable is very important;
· I want cheaper energy and reduced bills;
· I don’t want to be dictated to by synergy.

As for the decision to form of a VPP, Morgan says it’s about using the power of numbers to “negotiate” with Western Power, Synergy and energy market regulators as one body.

“We know one person has no chance, but 1000’s have lots of power. Psychologically and literally – we have more power together,” she said.

With 1000+ households and businesses signed up, organisers say the Dunsborough/Yallingup VPP would be able to provide 6.5MW of solar at peak, and 9.6GWh of energy a year – thus supporting regional reliability and reducing peaks.

This will not only save VPP participants money through energy self-generation and consumption, but should appeal to the local network and distribution companies, who can conceivably use the pooled energy resource to shave peak loads and save on infrastructure.

So while the project has “zero barriers” in terms of regulations – because DCEP is not seeking to be a retailer – its organisers have been making an effort to engage with the Public Utilities Office from the start.

“We believe we offer an infrastructure solution for Western Power with behind the meter battery and solar solutions and have begun discussions to look at fair value payments for services provided in time,” Morgan told One Step.

But perhaps even more importantly, the community-based project offers the utility a door into the “hearts and minds” of consumers – an asset even more valuable, and considerably more elusive than grid saving technology solutions.

As Giles Parkinson wrote on RenewEconomy last week, Australia’s incumbent energy industry – networks, generators, retailers – professes to be all about the consumer, these days, even as it continues to deliver some of the most expensive electricity in the world.

But the recent push by these same businesses to “kill the rooftop solar rebate before too many more consumers hook up to the technology,” shows there is a still a lot of work to be done to regain consumer trust.

Because, as Giles also wrote: “there is no doubt that the emergence of the ‘pro-sumer’ – households and businesses that can generate and even store their own power – is the biggest existential threat to the business models of big energy.”

At this stage, however, DCEP’s Morgan says meetings with WA’s Public Utilities Office have been “positive.”

And the project is in its early stages; working to get to a starting point of signing up 100 households to take part – at which time it can form a not-for-profit entity and get to work on the lease contracts.

Another perk for participants is that for every system installed, it will provide $250 to the Dunsborough Community Energy Project “community fund”.

This money will then be distributed to fund local community projects in schools, sporting clubs and or other projects such as a Dunsborough community pool.

Over the 10-20 year lifecycle of this project additional income and dividends will be attracted to the Dunsborough Community Energy Project, potentially raising up to $8 million in funds.

The community participants will then be able to vote on how this is spent – lowering energy costs further or giving back to local community projects.