How electric vehicles can help to slash rooftop solar payback

Combining rooftop PV with battery storage and an electric vehicle can more than halve the payback period for a home solar system, and fast-charge the transition to renewables, a new report has found. This could open doors to new opportunities and financing models for a comprehensive home electric set up here in New Zealand.

--
Article originally published here by Sophie Vorrath, One Step Off The Grid blog.
--

The report, by the Institute for Energy Economics and Financial Analysis (IEEFA), analysed the economic impact of combining rooftop solar with batteries and EVs, and the effects of different policy incentives – and disincentives – in Britain and Germany.

The report asserts that batteries and EVs can boost the economics of rooftop solar, by enabling households to use more of the electricity they produce, thereby increasing power bill savings, and reducing the payback period on the solar system. 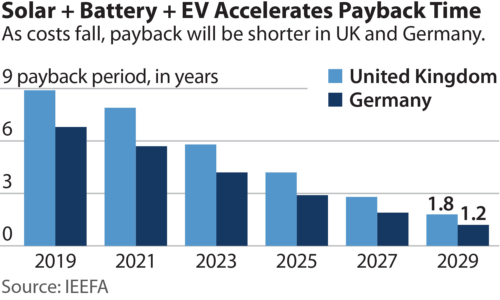 “Battery storage gives households further control over how they use their solar generation.”

The modelling shows that in Britain – where it currently takes an astounding 19 years to pay off rooftop solar – the payback for a “typical” 4kW rooftop PV system when combined with an 8kWh battery and a small 35kWh EV could be slashed to four years by 2025, and one year in 2030.

In Germany – where it currently takes around six years to pay for a rooftop solar system, the same-sized home PV-battery-solar combination would have a three-year payback in 2025, falling to below one year in 2030.

And while the study is modelled on the UK and Germany, only, IEEFA says it expects the same trends identified in the report to apply equally – or more – in sunnier countries in southern Europe and beyond, including Australia.

Add to the mix the “seemingly no-brainer regulatory reform” that allows households to sell their solar power on the wholesale market, and the equation becomes even better – for both consumers and the grid.

“Batteries and EVs can boost the economics of rooftop solar, by enabling households to use more of the solar power they produce, thereby increasing savings on their electricity bills,” the report says.

“These savings rise over time, as the cost of rooftop solar, batteries and EVs falls. In addition, we review how regulators can reform grid services markets, to put these technologies on a level playing field with conventional generation, which further boosts income.

“While not a focus of this report, we note that smarter domestic tariffs that reward consumers for using off-peak power can further drive demand, as will smarter EV chargers that contribute towards grid stability.”

The report also notes the ongoing importance of government subsidies for up-and-coming clean technologies like battery storage and electric vehicles.

“The falling cost of battery storage and EVs can drive new growth in renewables in Europe, but only if these low-carbon technologies have the same access to electricity network markets as fossil-fuel based ones,” said Gerard Wynn, IEEFA energy analyst and co-author of the report.

Indeed, the report notes that the comparatively long ROI for solar in Britain is largely due to the recent scrapping of all solar tariffs, meaning households with new rooftop PV systems have to give their power away for free, unless they have arranged private deals with electricity providers.

“Generous renewable energy subsidies have had their day, but scrapping these entirely and replacing them with nothing will damage renewables markets,” Wynne said.

“We conclude that EVs will be an increasingly potent driver of change in home energy systems and wider electric grids over the next five to 10 years,” said co-author and financial analyst Arjun Flora.