Strange but true: Australia has a lot to teach us about renewable energy

With the announcement that the Government will end offshore oil and gas exploration in New Zealand, and at the end of our four-yearly schooling by Australia in how to win medals, Vector’s Karl Check says parts of Australia are also making pretty good progress when it comes to shifting away from coal and gas fired power plants and onto renewal energy sources.

This story was originally published on The Spinoff

We love our Australian cousins but it’s been hard to resist a few good natured chuckles as we bore witness to such recent misfortunes as imploding politicians, ball-abusing sportsmen and a batting collapse that rivals, well, our own. Yes, reciprocal schadenfreude is one of the bonds that binds our two countries but when it comes to renewable energy we’re way ahead of those coal-burning Aussies, right?

Well, yes and no.

While there’s still lots of coal being burnt in Australia, the Australian Capital Territory (ACT) is going for 100% renewable energy by 2020. That’s from a starting point of about 80% non-renewable energy back in 2014-15. And they’re on track to get there, in just six years.

As for New Zealand, it’s not that we’re doing badly. Most of our electricity is already pretty clean. Our lakes and geothermal plants give us around 80%, even if the geothermal ones do emit greenhouse gases, yet still coal and gas are picking up the slack.

Yet, it feels like we’re still in the phase of talking about making the switch to 100% renewable electricity generation by 2035. As far as the relationship between Aussies and Kiwis goes, that’s not the right way around.

The Australian Capital Territory (ACT, or Canberra and some extra bits of bush) might have a population around the size of Greater Wellington but they’re punching well above their weight for using new technology and innovative ways of thinking to get to where they are. What they’ve been up to makes for a great case study for somewhere like Auckland, with a similar concentration of urban population with outlying rural areas: 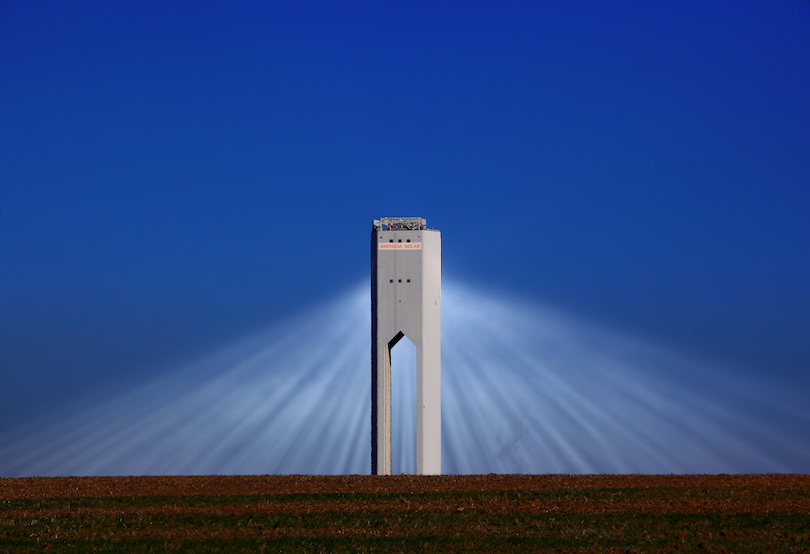 So how did they get all of this off the ground in such a short space of time? One of the key players in making it happen was Simon Corbell, who’s currently providing independent advice to the public and private sectors on renewable energy (and who also holds the official title of Victorian Renewable Energy Advocate).

I met Simon a few weeks ago on a whirlwind tour of New Zealand, arranged by Vector, to pick his brains about how we can get the last 15-20% renewable energy we need to hit the magic 100% renewable energy target. He’s a nice guy. Very smiley. Describes himself as a “recovering politician” (he’s the former Climate and Energy Minister for ACT, as well as former ACT Deputy Chief Minister). He’s very passionate.

Simon’s pretty clear on what needs to happen to get cities like Canberra, Melbourne, Auckland, Wellington… (pretty much any city, really) to lower their carbon emissions. Start with electricity (see above), then look at transport and other sectors. Technology buys us time to work on the deeper societal shifts that might be required to wean ourselves off what we currently think of as normal (like switching from angrily tooting at the motorist hogging the petrol pump to taking a break for 15 minutes while your EV charges).

In Simon’s view, the opportunity is right there for the Australian Capital Territory to jump ahead even further.

With their electricity generation piece already sorted, next up is electrification of the transport sector. Once EVs are out there, work out how to integrate all those mobile batteries with the electricity network so they can help spread the load at peak times. Electric buses, with their large batteries, would be great for this: when they’re not being used to move people around they can be used to move electricity around instead. Once the evening commute is over those big batteries can be plugged into the network in time for people to cook their dinner, watch Netflix and collapse into bed, tired, warm and fuzzy from saving all those carbon emissions. It’s worth thinking about this in the context of the recent government announcements on transport priorities, which have signalled a shift in priorities away from roading infrastructure to alternative transport options.

By now it was clear to me that Simon’s enthusiasm, and the ACT’s success in going renewable, isn’t just confined to one part of Australia. He pointed out that not only was South Australia one half of a bizarre, yet thoroughly modern Twitter deal with Elon Musk, it’s also just approved 150MW solar energy delivered in the form of an only-slightly-ominous concentrated solar tower (it looks like Saruman’s tower from the Lord of the Rings but instead of a disembodied evil eye it has mirrors to focus the solar energy at a collector at the top).

So we’ve got some catching up to do with some parts of Australia. But the good thing is, in a way, we have even more to gain.

While New Zealand’s hydro resources are the envy of many an overseas country trying to wean itself off coal or nuclear, we’re at the mercy of the weather to keep those lakes filled up with water. Not enough water means not enough generating capacity, which in turn leads to massive rises in spot prices for wholesale electricity.

In the industry, this is known as “dry year risk”. Simply put, it’s the risk that over the year we won’t get enough rain to fill the lakes, or enough snow to melt and flow through to the lakes later on. We only have about eight weeks of power stored in our lakes while Norway, another leader in hydro electricity, has two years. Still, our electricity system includes multiple generation sources and can cope reasonably well with the odd dry year, but what happens if we get a couple in a row? Right now in New Zealand the gap between having enough water and not enough water is filled by things like old-fashioned coal-fired electricity generation, which runs a little against our national aspirations for a low-carbon future.

In Simon’s view this can be can be addressed by encouraging more localised generation and storage such as solar and batteries, because it gives us more options. In parts of Australia, for example, there has been exponential growth of solar, with consumers and businesses seeing it as a way to take control of their electricity bill. While Australia has a different environment, there is no reason this principle couldn’t work here too, and deliver the added benefit of taking some of the pressure off hydro. And like the bus example, if you can work out how to link up all the batteries out there then you’ve got another way of shifting electricity around to where it’s needed, buying a bit more time for the rain to come.

There are naysayers out there who’ll tell you that residential solar and batteries will never get you past a massive hydro shortage, and to a certain extent they’re right. You’d need about 1.1 million residential systems to replace Manapouri, but every bit of localised generation and storage would certainly help.

But if we need to go next-level, then how about a partnership with X, Google’s moonshot factory? They’re working on a plan to store energy in giant salt tanks. Could be a good opportunity to get one over those Aussies.