With New Zealand and the world on a rocketing trajectory for electric vehicle uptake, battery technology and production looks like it will be one of the key factors in maintaining growth in the industry and who will come out on top.

Recent reports from New Zealand Nissan Leaf owners and electric transport community group, Flip the Fleet, have found that the battery health of the newer 30 kilowatt Nissan Leaf cars could be degrading at a faster rate than the older model, causing concerns that could dent consumer confidence if not remedied promptly.

New Zealand, and the world, urgently need to de-carbonise our transport fleet and SEANZ are right behind this mission. A smart home that can draw on an EV battery to power the house at night will become commonplace but could put an additional burden on battery life.

This story from Bloomberg reproduced below spells out where the competition is at internationally and how the ability to produce batteries could dictate who sells the most cars. 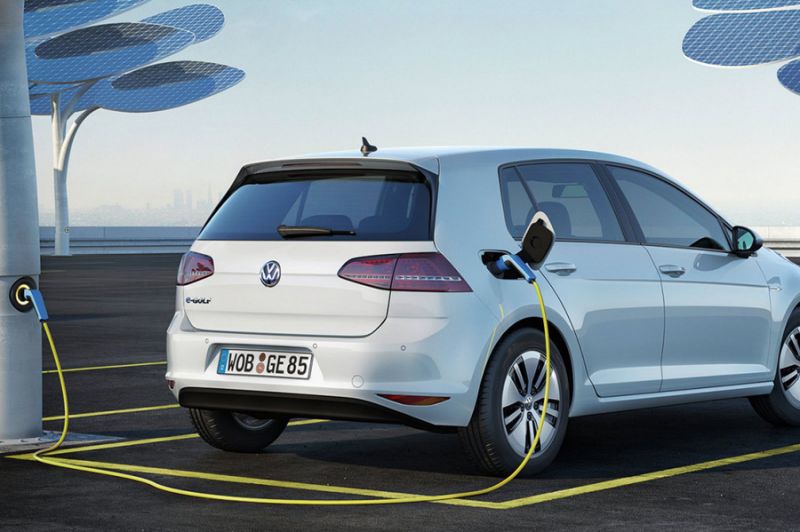 Volkswagen AG secured 20 billion euros ($25 billion) in battery supplies to underpin an aggressive push into electric cars in the coming years, ramping up pressure on Tesla Inc. as it struggles with production issues for the mainstream Model 3.

The world’s largest carmaker will equip 16 factories to produce electric vehicles by the end of 2022, compared with three currently, Volkswagen said Tuesday in Berlin. The German manufacturer’s plans to build as many as 3 million of the cars a year by 2025 is backstopped by deals with suppliers including Samsung SDI Co., LG Chem Ltd. and Contemporary Amperex Technology Ltd. for batteries in Europe and China.

With the powerpack deliveries secured for its two biggest markets, a deal for North America will follow shortly, Volkswagen said. In total, the Wolfsburg-based automaker has said it plans to purchase about 50 billion euros in batteries as part of its electric-car push, which includes three new models in 2018 with dozens more following.

Volkswagen’s battery plans compare to Tesla’s $17.5 billion worth of purchase obligations as of last year, including $15.4 billion in deals through 2022, primarily related to buying lithium-ion cells from Panasonic, according to a recent filing. Volkswagen called its battery tender one of the biggest purchasing initiatives in the auto industry.

As of next year, the 12-brand group will roll out a new battery-powered model “virtually every month,” Chief Executive Officer Matthias Mueller said at the company’s annual press conference. “This is how we intend to offer the largest fleet of electric vehicles in the world.”

Diesel Quandry
Pressure has intensified on Volkswagen to overhaul its lineup. Its diesel-cheating scandal, which erupted in September 2015, sparked a backlash over the technology, including potential urban driving bans. Diesel is key to efforts to meet tighter environmental targets because of its fuel efficiency, even though it emits smog-causing nitrogen oxides.

The German automaker reaffirmed its backing for the technology, with Mueller calling it “part of the solution,” even as Toyota Motor Corp. pulls diesel cars from its lineup in Europe, the main market for the vehicles.

Volkswagen shares slipped 1.7 percent to 155.82 euros as of 4:05 p.m. in Frankfurt, reversing a gain earlier in the day and extending the stock’s drop this year to 6.4 percent.

As part of Volkswagen’s 20 billion-euro push into electric cars, it’s setting up a standalone sub-brand for battery-powered vehicles. The first model with the I.D. nameplate will be the Neo hatchback that goes on sale in 2020. The Audi luxury marque is set to begin deliveries later this year of the all-electric E-Tron SUV.

Even with the battery-purchase deals, Volkswagen’s power-supply issues are still far from over. The company, which has struggled to secure sources of cobalt, a critical component for modern batteries, said that it’s working on ways to reduce the amount of the element needed for its electric cars, suggesting ongoing concerns even after setting up supplies for its initial electric-car rollout.

The automaker has enough cobalt for those vehicles, but access to the metal remains a long-term issue industrywide, Chief Financial Officer Frank Witter told Bloomberg TV. 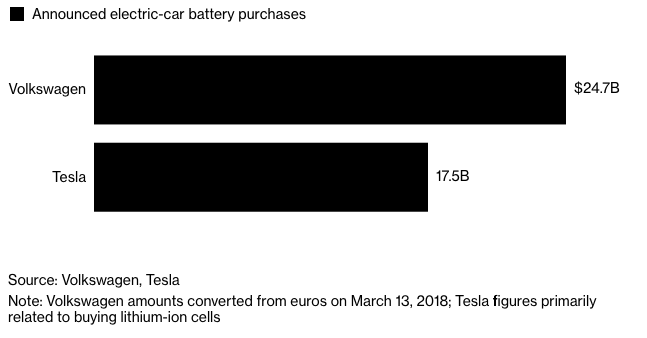 Manufacturing the powerpacks themselves is not in the cards. “This is not one of our core competencies,” said Mueller, who has faced pressure from employee representatives to invest in battery-cell production. “Others can do it better than we can.”

Chinese producer CATL, which Mueller confirmed Tuesday as one of Volkswagen’s future battery providers, is considering a site in Europe for its first overseas plant, Chairman Zeng Yuqun said a week ago.

Development Spending
Even with its push to ramp up electric-car production and avoid penalties from tighter environmental regulations, Volkswagen plans to rein in expenditures. Development spending declined 3.9 percent to 13.1 billion euros in 2017, equivalent to 6.7 percent of sales. The company reiterated a target to lower that ratio to 6 percent by 2020.

Managing the technology shift requires an intense focus on maintaining profitability from Volkswagen’s current lineup. The manufacturer predicts an operating margin this year of between 6.5 percent and 7.5 percent of revenue, compared with 7.4 percent in 2017.

“Naturally, we are looking to continue our operating business success in 2018,” said Mueller. “Not least because we must generate the revenue we will need for our enormous future investments.”