A Waikato manufacturing plant will soon be able to operate solely on the power of the sun during the summer months.

When completed, the solar energy system to be installed on the roof of the Laminex New Zealand facility in Hamilton will be one of the largest of its kind in the country.

The 2724m2 solar panel system will reduce carbon emissions and reduce energy costs of the 38-year old building near Pukete. It will produce enough power over a year to run the equivalent of 90 average homes.

The Laminex factory operates 24/7, with 54 staff, manufacturing surfaces used for kitchens and other interior design projects for customers all over New Zealand.

When the solar panels are added to the plant's roof, it's expected the new power system will contribute about 79 per cent of the factory's overall electricity use in a year.

Vector PowerSmart will install the 524kW solar system by mid-2020 for Udy Group, the commercial landlord of the facility.

It will on-sell the power to Fletcher Building's subsidiary, Laminex.

Site manager David Miles said he expected the new solar panels to arrive from China soon and work on the month-long installation project would begin straight away.

"It's a big job, over 1000 panels to install. We're currently doing some strengthening work for the solar panels to go on the roof but the building's in a good position to support these panels.

"From the original building constructed here in 1982, we've added three more warehouses to expand over the years. The site is north facing which is handy for a project like this."

From December through to March, the plant is expected to be able to function using just the power the solar panels collect from the sun. It could slash 30 per cent of electricity costs from its power bill.

"If we have another summer like this one, we could operate using just solar power longer. At night, we will still be pulling power from the grid.

"Obviously there will be less during winter because there's less sun hours. But even during a winter's day, it's anticipated 70 per cent of day-time power will come from the panels." 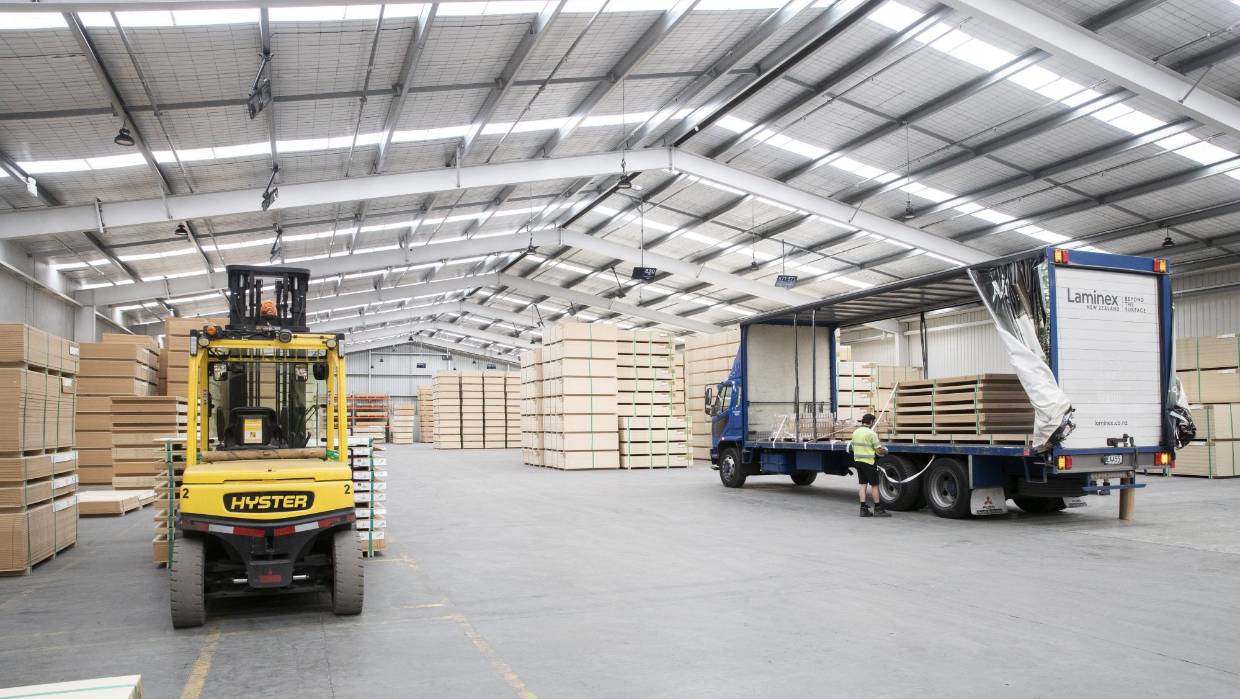 Laminex's warehouses feature sky lights and LEDs to reduce electricity use. The company also switched over to electric forklifts.

Miles has worked at the factory for 19 years. Laminex has evolved over time but the past five years has recorded the most activity towards lower energy use and lower carbon emissions.

In 2013, the factory installed LEDs in its warehouses to cut down on electricity use, as well as light and movement senses, to reduce power.

That initiative alone has saved 20 per cent on the factory's power bill.

Sky lights were retro-fitted into all of the factory's warehouses.

The factory also switched over to electric forklifts and is now putting meters on all of its major appliances, to measure how much power each unit is using.

"Then we can make better decisions about whether we run certain equipment during the day, and other things during the night, to make the best use of power we get."

In 2019 the company ran a project to reduce its water use and found it was able to save a family-sized swimming pool of water every day in a single month.

"We are measuring everything we can. We measure how much stuff goes into the bin, what waste goes in there and whether or not it can be recycled.

"Then we can make a target for reduction."

Laminex New Zealand General Manager Mike Arthur said the company is committed to achieving 30 per cent reduction in its carbon emissions by 2030.

Using renewable energy at its manufacturing sites will help it reach the target.

"Commercial building owners with large, unobstructed roof space should consider whether solar made sense for them and their tenants because electrifying the economy is one of the key ways we'll be successful as a country in meeting our carbon emission reduction goals."